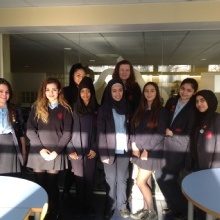 Following their ongoing peer education work on e-safety, our Year 11 Digital Leaders were approached by Childnet International to take part in a national campaign for next month's Safer Internet Day  - http://www.saferinternet.org/safer-internet-day.

Representatives from Childnet International led a workshop on e-safety and facilitated a short video project focussing on our shared responsibilities when online and using social media.  The video projects will be edited to form part of a national campaign entitled "Let's create a better internet together".  This will be launched at a special event on Safer Internet Day, held at the Microsoft offices in central London and attended by leading technologists and also some members of parliament.

We were thrilled to be selected to be part of such a high profile and important campaign and I was delighted to receive very complimentary feedback from Childnet.  They were particularly impressed by how enthusiastic and articulate our students were.