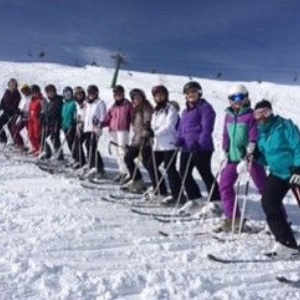 Early in the morning on the 13th February, 44 pupils and 4 staff travelled to the Ski Resort of Prato Nevoso in Northern Italy. The trip had been planned over fourteen months and the students were extremely excited to be finally on their way for a week’s great skiing.

We drove to Dover and caught a ferry, travelling overnight through France. We arrived in Prato twenty-seven hours later following a long, difficult journey. On arrival to Hotel Mondole, it was straight to bed for the girls, luckily they were also able to have a lie-in the next morning ready for the mammoth task of getting kitted out with our skis and boots and helmets and heading to the slopes to meet our lovely instructors (Mario, Alberto, Sergio & Matteo) for the first lesson on the week.

The students were sorted into four separate groups depending on the level of their experience and we headed to the mountain. With much sun cream applied, the first lessons started with a basic lesson on controlling the skis for our beginner groups. Most of the group took to it like 'ducks to water'. By lunchtime, we had mostly grasped the ability to stop and turn under control. Those who had skied before spent the day impressing their instructor with synchronised skiing and some 'human' slaloms.

Over the course of the week, students were achieving huge personal goals every day, skiing steep runs and taking risks outside their own comfort zones and recognising their own and each other's achievements along the way. Friendships got tighter and the trust and support between the groups were outstanding whilst they assisted each other to make progress in unknown territory.

Breakfast everyday started with a full continental selection of croissants, cold meats, cheeses and juice or hot chocolate before we headed off to ski school. We were lucky enough to be staying in a ski in/ski out resort which meant lunches consistent of hot meals - mainly lovely pasta which gave pupils the energy they needed for the afternoon ski. Dinner set us up for the next day with a four course meal every evening.

Immediately after dinner, the students returned to their rooms to get ready for the evening activities such as splashing around in the hotel pool, a quiz night, tubing, shopping, pizza night and a disco.  We even managed to fit in a spot of night skiing.

On Thursday evening all students were congratulated by their instructor and presented with a medal and a certificate that indicated the level of progress they had made during the week. During the presentation, there was a real sense of pride in their own and their peers’ achievements. This was felt by the whole party – a proud moment for our staff.

On Friday, the party had their last four hours on the sunny slopes, a final chance to perfect their new skills. Many snow balls were thrown (especially at staff!) and at the end of the day, the whole party came off the slopes buzzing about their experiences.  Many students described their experience as ‘absolutely phenomenal' and ‘best trip ever!’. After all equipment was returned and packing completed, we had another (pasta) three course dinner and then got on the coach for a 23 hour return journey.

We were extremely proud of the behaviour and attitude of all of the girls – they were a real credit to the school. Many of the resort staff commented on their excellent behaviour and positive approach to the week.