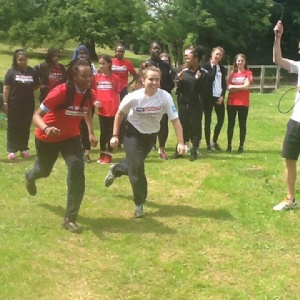 On Wednesday 8th June, Paralympic gold medallist Tim Prendergast visited our school to conduct workshops with Year 10 students in conjunction with the Sky Sports “Living for Sport” programme.  He also spoke to Year 7 about his experience as a paralympian during a special assembly.  Students involved in these activities have written about this below.

On the 8th June 2016, the whole of Year 7 gathered for a special assembly from Sky Sports, Living for Sport.  The assembly was hosted by the athlete Tim Prendergast who, at the age of 8, found out that he had a rare condition which made him lose 90% of his eyesight.  He explained that at a young age he was ready to give up and that he found inspiration in his PE lessons.  His teacher really inspired him not to give up and this message stayed with him and ultimately helped him to achieve his goals.

After the assembly, our whole form group couldn’t stop talking about Tim’s story and how confident, hard working and dedicated he is.  He even kept going when things didn’t go to plan and this inspired us.  We were gripped by the assembly and are very grateful to Tim.

This opportunity really made us think about self expression and Tim’s story inspired us to never give up and to be motivated both now but also for the future.  He spoke about the importance of self belief and during the day we worked in teams with students we didn’t know as well.  This helped us to learn from each other and to consider the importance of communication.  As well as being insightful the day was really fun and it definitely made us think about our futures.  We are so thankful for Tim coming to work with us and giving up his time.