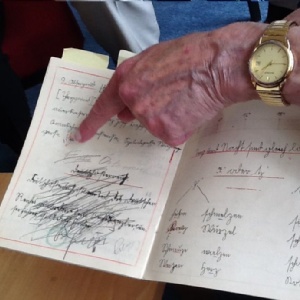 Year 9 had the privilege of listening to the testimony of Holocaust Survivor George Vulkan. We would like to thank our students for being a true credit to the school and for thinking of some excellent questions that made for an even more worthwhile experience. We would also like to thank the Holocaust Educational Trust for helping to organise the event and most importantly, we extend our sincere gratitude to George Vulkan for retelling his very moving story and for delivering some very inspirational messages about prejudice and discrimination to our students. The accounts from students below demonstrate just how much they learned from the experience.

On the 15th of July 2016, after a number of lessons learning about the politics, misfortunes and liberators of the Holocaust, Year 9 were fortunate enough to have Holocaust Survivor (George Vulkan), share his heart-warming story with us.

His inspiring story gave us a better insight as to what happened between the years when Hitler rose to power and the end of The Second World War. He spoke to us about his life before the Nazis and how he was treated as any other ordinary boy, despite his Jewish background. He then went on to describe how Austria became a part of Germany, resulting in Hitler’s policies towards the Jewish people being enforced in his community. We learnt about George’s family, and how each person was affected differently. For example, he moved to London with his parents as a young boy but his little cousin (Elsie) was sadly separated from her parents on the Kinder Transport train. She was sent to live with a Jewish family she didn’t know in Glasgow – after her father was murdered for being a socialist, a Jew and for rising up against the Nazi party.

George spoke in much detail about his experience and some students were brought to tears as a result. We were so fortunate to be lucky enough to have a visit from one of the very few Holocaust survivors, and we will remember him as an inspiration. We thank him for coming in and sharing his story with us, as well as answering any questions we had – no matter how personal.

It was very moving to hear how George Vulkan was affected by the Holocaust. He was very brave and confidently shared his testimony with our year group which we are really grateful for. Although George had a very negative experience, he had a clear and inspiring message to deliver-to stop any type of prejudice and discrimination today.

We feel very honoured to have had this once in a lifetime experience of hearing first hand about the tragedies that were faced by millions of Jewish people during the Nazi rule in Germany. We would like to thank the entire History Department for making this happen and for preparing us for the visit. Most importantly, we would like to thank George Vulkan for expanding our knowledge of The Second World War and The Holocaust and for answering our questions so openly.