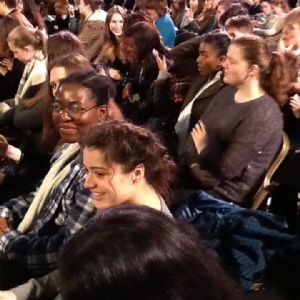 Students from our A-Level History classes visited the AIM History conference in the Camden Centre on 25th November 2016 to learn about the Tudors.  Here is some feedback from two members of the group.

"We attended the AIM conference to listen to multiple lectures about the Tudors. All of these were informative and highly interesting; we learned something new at each lecture and gained a deeper insight into the period. For example, we were unaware of the fact that during the Reformation, not only were the Catholic churches and other places of workship strippped of their gold and riches, some were completely demolished and statues were defaced by having their heads removed. Furthermore we also learned that the reign of Queen Mary I was recorded as the Reign of King Philip the first and Queen Mary, hence the difficulties she faced as it was  not just her reign but her Spanish husband's, who was rarely in the country. We also were able to listen to the famous historian David Starkey, although he did express some very controversial views, his knowledge and understanding of the period and the many monarchs throughout history was extensive and impressive."