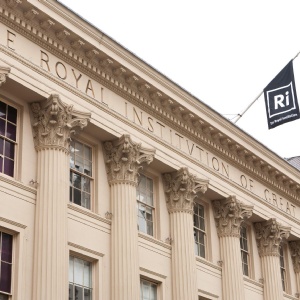 On Sunday, 1st July we went to the Royal Institution, in Mayfair, for the Mathematics Masterclass.  After signing in we were able to explore the building. The lectures started at 11:15am, but there were many puzzles to try in the different rooms for those arriving early, like us. When it was time for the first lecture, everyone made their way to the historic lecture hall and we both took our seats.

The first lecture was by Prof. Julia Gog from the University of Cambridge. Prof. Gog, a specialist in mathematics and infectious diseases, taught us how mathematics can stop epidemics from breaking out. One particular topic Prof. Gog talked about is the

R0 tells you the average number of people who will catch a disease from one contagious person. It applies to a population of people who were previously free of infection and haven’t been vaccinated. When R0 ≤ 1, the existing infection causes less than one new infection, then disease will decline and eventually die out. Whereas when R0 ≥ 1, the disease will spread between the population, and there may be an epidemic.

Prof. Gog ended the lecture with a statement, “We don’t know if mathematics can prevent the outbreak of epidemics, but with the help of different specialists from different areas, we can still reduce the chances of epidemics happening.”

After the talk, it was lunch. All the rooms were open for us and a competition was held. Anyone could enter (solo or as a team) and it was a booklet of questions very similar to those in the UKMT maths challenge. It was just a challenge for us to attempt during our break and there would be prizes that would be handed out to those who did the best at the end of the day.

We handed the booklet in just before the second lecture. The second lecture was taught by Prof. Felix Flicker, a specialist in theoretical physics from the University of Oxford. Prof. Flicker stated the lecture by telling Hilbert’s theory of the grand hotel, which is a paradox. A paradox is a statement that sounds reasoning but leads to a self-contradictory or logically unacceptable conclusion.

Prof. Flicker showed us many ways paradoxes can be used in math and science. If paradoxes are made into 3D shapes, the “veridical” side of a shape is where the shape finds its equilibrium and stays, whereas the “falsidical” side of a shape is where it doesn’t find its balance and falls to the veridical side. Most shapes have multiple veridical and falsidical sides. However, there are some exceptions. A sphere has an infinite amount of points of equilibrium, meaning an infinite amount of veridical points.

A shape with only one point of equilibrium is suggested by a Russian mathematician Vladimir Arnold in 1995 and proven in 2006 by Hungarian scientist and mathematician Gábor Domokos and Péter Várkonyi. The shape, gömböc has one point of equilibrium, meaning one veridical point and one falsidical point, therefore the shape will always turn back to the veridical point. The shapes unique design can trace back to the shape of shelled animals such as tortoise.

Prof. Flicker then linked the idea of paradox with the angular momentum of electrons and visual illusions. After that, we ended the day with the awarding of the prizes.

We didn’t get awarded the prizes, but the experience we had gain that day was amazing and unique, we also met students from other schools with incredible knowledge of mathematics. We hope to go back next year!

Please enter some content for your news story here.