It reconstituted on the 24 April 2018 to bring the school in line with the Government’s latest recommendations for academies.  (The relevant documents can be found below as attachments)

The Board of Trustees meets five times a year.

It has a Finance and Premises Committee which meets four times a year.

There is also a Pay Committee and an Admissions Committee.  Please see our annual accounts (below) for information about salaries over £100,000. 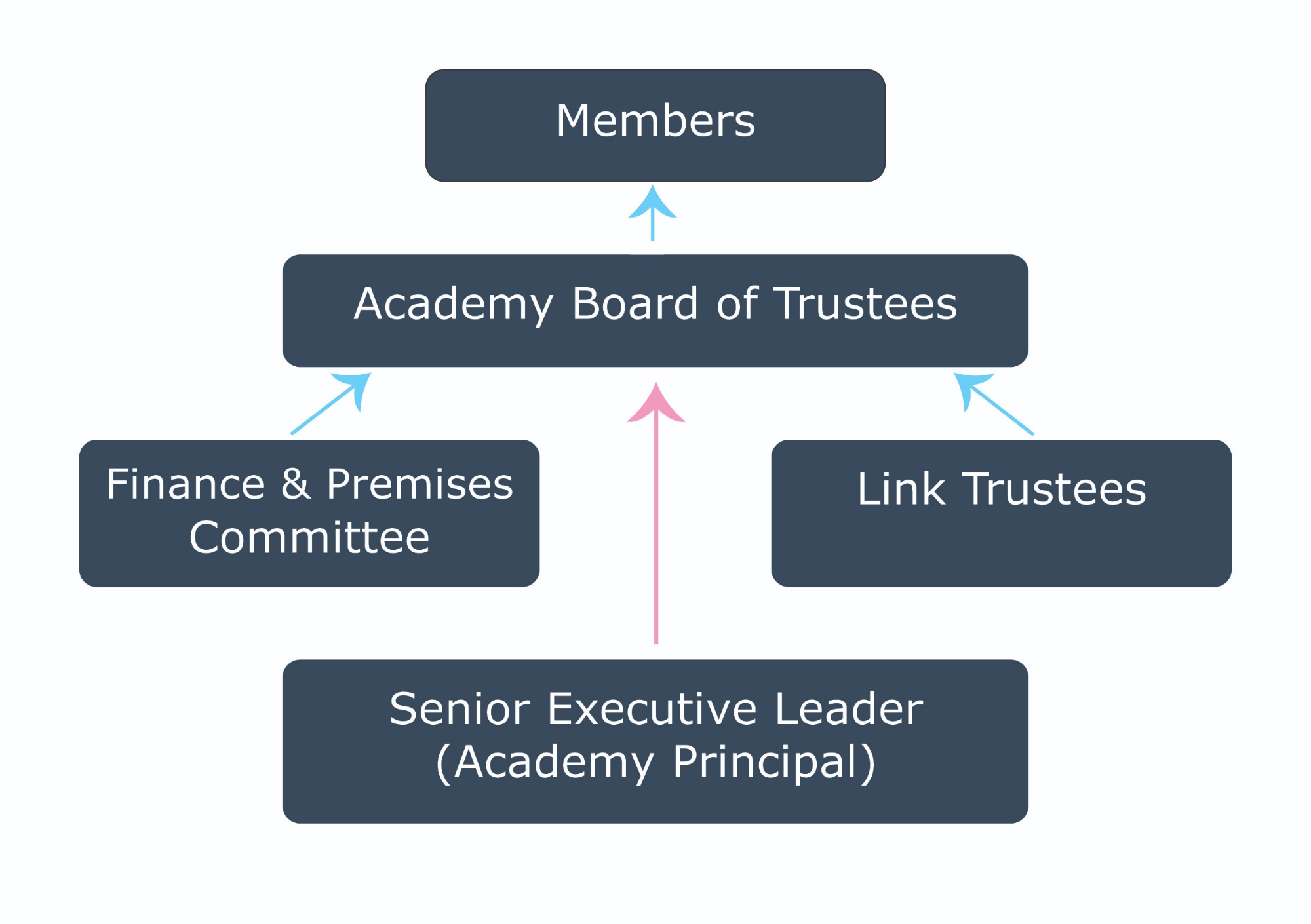 Governance structure and lines of accountability

The principal will report to the board on the performance of the academy, although this will be supplemented by the monitoring of trust board committees and individual trustees with any delegated responsibilities.

The principal is performance managed by the trust board.

The Role of the Members:
The members appoint trustees to ensure that the trust’s charitable object is carried out and so must be able to remove trustees if they fail to fulfil this responsibility. Accordingly, the trust board submits an annual report on the performance of the trust to the members. Members are also responsible for approving any amendments made to the trust’s articles of association.

While members are permitted to be appointed as trustees, in order to retain a degree of separation of powers between the members and the trust board, and in line with DfE expectations, not all members should be trustees. Under model articles employees are not allowed to be Members.

The role of trustees:
The academy trust is a charitable company and so trustees are both charity trustees (within the terms of section 177(1) of the Charities Act 2011) and company directors.

The trustees are responsible for the general control and management of the administration of the trust, and in accordance with the provisions set out in the memorandum and articles of association and its funding agreement, it is legally responsible and accountable for all statutory functions, for the performance of the trust, and must approve a written scheme of delegation of financial powers that maintains robust internal control arrangements.  In addition, it must carry out the three core governance functions:

The board of trustees has the right to review and adapt its governance structure at any time which includes removing delegation.

The role of trust board committees
The Academy Trust of Queen Elizabeth’s Girls’ School has a Finance & Premises Committee to which the board delegates financial scrutiny and oversight.

The trustees may also delegate responsibilities to other committees or to individuals as appropriate.

The membership (at least three trustees) and responsibilities of board committees are set out in the committee’s terms of reference.

The role of the senior executive leader
The principal has the delegated responsibility for the operation of the trust.

The principal is the accounting officer so has overall responsibility for the operation of the academy trust’s financial responsibilities and must ensure that the organisation is run with financial effectiveness and stability; avoiding waste and securing value for money.

The principal leads the senior leadership team (SLT) of the academy trust. The principal will delegate management functions to the SLT and is accountable to the trust board for the performance of the SLT.

If the principal is also a trustee they are entitled to participate in votes and committees of the Board of Trustees.

Further details of the board can be found in the Trustees’ Handbook (see below).

The chair of the board can be emailed via chair@qegschool.org.uk

Current Members of the Governing Board

Claire works within HM Government delivering high-level events and Ministerial visits in the UK and overseas, including activity around the Olympics, NATO and the Commonwealth Games. Prior to these roles, Claire has led on marketing campaigns within the private sector and for the 2012 Mayor of London election campaign.

Claire graduated from the University of Nottingham with a degree in American & Canadian Studies, and is passionate about ensuring that young women are able to achieve and reach leadership roles.

Sunbul, a parent trustee, works in publishing. Graduating with a degree in Politics and Internal Relations from the University of Westminster, Sunbul started her career in commissioning and editorial work before moving into her current role as the publisher of a journal in academic publishing. She is committed to diversifying the editorial boards of journals in her portfolio by nurturing academics in publishing, from researchers to reviewers to editors.

Ashley is deputy dean of Brunel University London's College of Business, Arts and Social Sciences and Professor of Organisational Transformation at Brunel Business School. His research and consultancy expertise covers the development and implementation of strategy. He has won a number of grants over the years, most recently with UKIERI, to create a curriculum for employability skills for mainstream and special needs students.  He has published three books and over one hundred papers.

Ashley has worked with many organisations advising them on a variety of business process, digital transformation, strategic, knowledge management and information systems issues. He is on the council of the British Academy of Management and founder of the organisational transformation, change and development special interest group within the Academy. He serves on the governing board of a school.

Prior to joining Brunel Business School, Ashley was with the Cranfield School of Management for 17 years in a variety of senior academic roles. Ashley attained his doctorate, which focused upon the implementation of radical process oriented change, from Cranfield University. Ashley completed a MBA at Strathclyde Business School. He elected to specialise in corporate strategy and finance. Prior to his MBA, he completed the Chartered Institute of Bankers examinations. Before joining academia, Ashley spent ten years in the banking industry.

Diana has spent much of her career working in HR, developing talent, and coaching executives and C-suite from global organisations within a plethora of divergent sectors. She has spent the last 20 years living and working in various cities in the world including Buenos Aires, Rio de Janeiro, Paris, Barcelona and most recently, Milan, wherein she also completed an MA in HR Management. Having recently returned to London, and on completion of her CIPD dip in Organisational L&D, she has now taken on a senior OD consulting role with her London-based clients.

Diana also serves on the board of two of Milan’s top business schools, is a member of Women on Boards, and is actively involved in voluntary work, with particular emphasis on empowering young women to challenge the status quo and attain prominence in the world of work. She is also a fierce advocate for DE&I in both the corporate and education sectors.

Originally a graduate chemist, Alison has worked in IT roles in the pharmaceuticals and life sciences sector for 31 years, 17 of them as CIO. Since November 2013, she has been the CIO for the Francis Crick Institute.  Her work in leading the team that set up the IT capability for the Crick was recognised with the Women in IT 2018 CIO of the Year award. Alison is mum to a teenage son and daughter. She is also a governor at her son's state grammar school.  She is enthusiastic about encouraging women to follow careers in STEM subjects in general and IT in particular.

Saba is Chartered Accountant and has spent the last 19 years working in Accounting, Controlling and Data roles with the Financial Services sector.

A mother to two primary school aged children, Saba grew up locally and attended Copthall School for Girls in Mill Hill. She is a strong supporter of girls studying STEM subjects.

Saba has a degree in Chemistry with Management from Imperial College London.

Debbie has been on the governing body since 2006, first as a parent governor and now co-opted and has moved from being a trustee to a member of the governing board. Her two daughters both attended the school. She currently works as a gardener and designer but has a background in computing and a degree in modern languages. As well as having been chair of a local drama group she is involved in many other ways, including acting and directing. Debbie has served as chair of the welfare committee and sat on both the finance & premises, and achievement & behaviour committees.

Rebecca works as a senior lawyer in an advisory role in central government. She started her legal career in an international corporate law firm and has wide-ranging legal experience in fields as diverse as corporate, employment, equality, international and EU law. She also sits as a part-time Judge in the First-tier Tribunal. She is deeply committed to diversity and inclusion and has a particular interest in gender issues. She was a women's officer and a student support officer at Oxford University where she read English. She also has a Masters in Anthropology from SOAS. She is keen to encourage all girls to be confident, ambitious and to develop their potential to contribute meaningfully to our community. She has sat on the Behaviour committee and is link governor for policies, equalities and careers.

Bushra is an Assistant Director at the Department for Business, Energy and Industrial Strategy (BEIS). She has worked across a number of central government departments on a range of high-profile policy areas.

A mother to two young girls and a local resident, Bushra is passionate about the role that schools play in nurturing potential and developing confidence in their pupils.

Bushra has a degree in History and Politics from Queen Mary, University of London.

Adrienne is a Controls Manager at JP Morgan, designing and implementing control and governance frameworks. Prior to that she held a number of Finance and Regulatory roles at JP Morgan over her 30 year tenure with the bank, having trained initially as an accountant, and brings a wealth of financial and controls experience to the board. Adrienne has a Maths degree from Cambridge University and is a strong supporter of girls following STEM careers. She is keen to contribute to the development of young people and to help them reach their full potential. She participates in graduate recruitment and mentoring of employees at JP Morgan. She is also a Maths volunteer at an inner London school.

Jessica is a parent governor, who has lived in Barnet most of her life and is a former QE Girl and then read Philosophy, Politics and Economics at Oxford University.  Jessica is an experienced finance professional who is currently Head of Finance at the King's Fund having previously worked in education finance at Hackney Community College having qualified as a Chartered Accountant with Deloitte

Violet began her career in education as a mathematics teacher in 2001 after two previously successful careers in accountancy and psychotherapy. She has achieved the National Professional Qualification for Headteachers. Violet was accredited as an Advanced Skills Teacher in Mathematics in 2004 and is an LLC Coach and an accredited Specialist Leader of Education. In 2006 Violet set up a new sixth form, judged outstanding from its first inspection. Alongside her role as head of sixth form and assistant headteacher at an outstanding school in Harrow, Violet worked with the National College as part of the London Leadership Strategy to develop teaching across Greater London and to write and deliver a programme to build capacity in sixth forms in Greater London and Greater Manchester schools and sixth form colleges. Violet was seconded for a period in 2011, as a deputy headteacher, to an outstanding school in the Royal Borough of Kensington and Chelsea, to support the development of the leadership team and improvements in mathematics. In 2012, as a specialist leader of education and sole deputy headteacher, Violet joined a school in Ealing which had been placed in special measures three months earlier. She supported the headteacher to take the school out of special measures in a year. Violet’s areas of responsibility included the curriculum, quality assurance of learning and teaching and data triangulation, professional development of staff, staffing and performance management.  Violet was key to the improvement of the school which was judged to be good, two years later, in the summer of 2015.